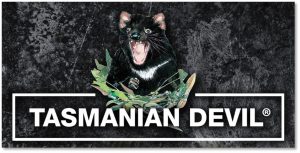 In 1934, Eddie Wigston founded a retail store in the town of New Norfolk situated on the Derwent River (a popular trout fishing district) 22 miles upstream from Hobart, the Capital of Tasmania. As a keen marksman and an avid fisherman he operated the business known as E L Wigston, selling radios, firearms and fishing equipment until he was joined by sons Ian and Garth. The Wigston family are keen  anglers and during the 1960’s considerable time was spent experimenting with home made fishing lures. Over the convivial glass of beer at the local club one Friday evening  during the late 70’s, the concept of mass production of lures was discussed at length by Eddie, Ian and Garth. A name for the lure was all important and finally the selection of “Tasmanian Devil” (after an aggressive indigenous Tasmanian Marsupial) was chosen. The “Tassie Devil” as it is more affectionately known, was born. Toward the end of 1979, production finally commenced. The early versions of the lure were very quickly snapped up as demand began to exceed supply. From humble beginnings with a hand made product, development of suitable equipment and technology more appropriate to the task of increased  production was introduced. Eddie continued in the role of Chief Lure Tester until his passing in 1990.